Just How Good is Shai Gilgeous-Alexander?

On the heels of the Kansas City Chiefs signing superstar quarterback Patrick Mahomes to a gigantic 10-year extension, I began to ponder what exactly it was the Thunder had with their rising star — Shai Gilgeous-Alexander.

As we sit here on SGA’s 22nd birthday (July 12) it’s safe to assume he’s nowhere near his athletic prime. Yet, I don’t think anybody would argue SGA isn’t at least OKC’s second-best player after Chris Paul — who happens to be a future first-ballot Hall of Famer.

Whenever the Thunder traded Paul George to the Los Angeles Clippers in return for a massive package that included SGA, most Thunder fans immediately perked up at the idea of having a young, rising superstar to lead the rebuild. Or, at least they did after the acceptance that the PG13/Russell Westbrook era in OKC was definitively over.

Now that Shai has been in OKC for close to a full season, fans can start to form the idea of what exactly he is going to be in the years ahead.

Is SGA truly a guy you can count on to be the #1 option for years to come, though?

Can he lead the Thunder to that elusive title?

Honestly, I do think he has the potential to be a team-leading, All-Star, MVP-candidate type of player. Shai plays with a smoothness that is hard to compare to others, and his quiet/colorful personality seems like a marvelous fit in Oklahoma City. You can feel the state starting to fall in love with SGA in a way very similar to stars of the past, and he has reciprocated that love posting on Instagram with the simple statement of “I love Oklahoma City.“

It is really fun and exciting to see something like this growing before our very eyes, as we plunge into a future that is admittedly a bit murky. Sure, this year’s bunch has been incredibly fun — but several of the guys could very easily not be in OKC much longer after this year’s conclusion.

I have very high hopes for what Darius Bazley could grow to be, and I have similar feelings about Lu Dort. Hamidou Diallo is another guy I refuse to give up on and, frankly, Steven Adams is still sneaky young, as well. However, the long-term look of the team is very much in question.

With the absurd number of draft picks at Sam Presti’s disposal, the odds are very good that the Thunder are able to land at least another one or two key contributors through the draft in the years ahead — or even possibly package some of those picks into a blockbuster trade deal. Knowing his centerpiece (SGA) is secure gives Presti the flexibility to use his assets to build a contender.

Despite all the uncertainty with what OKC will look like in the new era, we know one thing for sure: Shai Gilgeous-Alexander is going to be a big, big part of the new era of Thunder basketball — and it is going to be incredible to watch unfold. 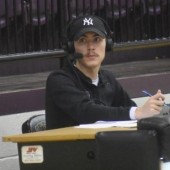